Last week I attended the official 2019 IIIF Conference in Göttingen. It was maybe the hottest week of the year, so the first thing the IIIF Consortium bought, was a fan to get some fresh air for the audience.

IIIF (Triple-eye-eff), the International Image Interoparability Framework is a set of APIs for having a standardized retrieval of Images, Metadata and more.

An image can for example be referenced by using an URI with the following schema:

The conference was held in Göttingen from June 24th to June 28th at the “Alte Mensa” and a bunch of estimated 200 attendees from all over the world came here.

The Conference’s Monday started with welcomings from people involved in the IIIF Consortium and the organizers of the conference and afterwards some really interesting Showcases were presented.

The SUB Göttingen also had a slot there and showed the usage of IIIF in Libraries. As every Talk was time-boxed everything went in time and I got some really cool insights in what is going on in the IIIF Universe. 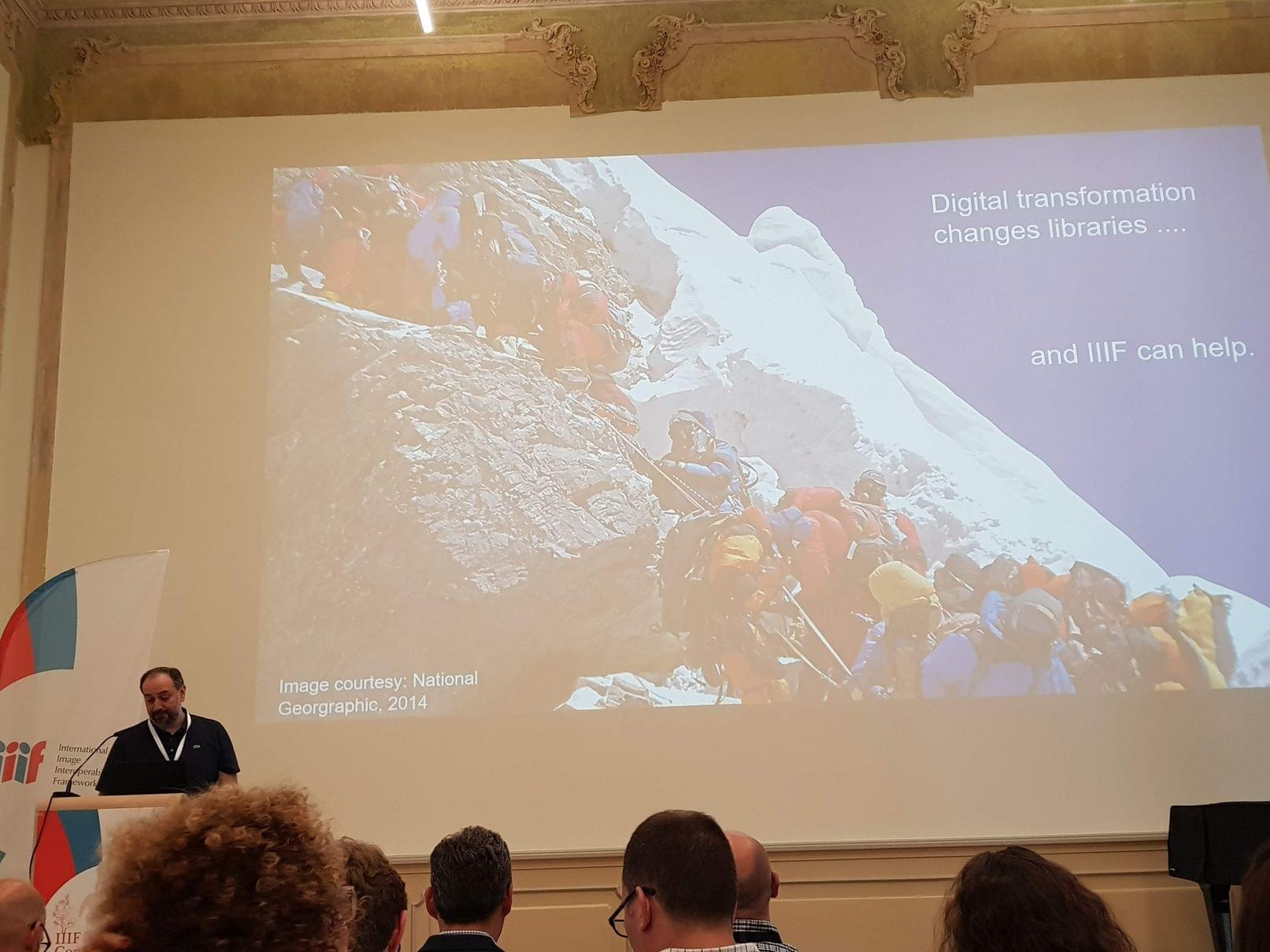 After the first day (and also the most other days), the participants could choose whether to attend a guided city tour in Göttingen or a guided library tour.

Day Two was the workshop day with three parallel tracks and a morning and an afternoon session. I attended the Mirador 3 workshop, that showed some nice insights into the current state of the development. A shiny new design, based on Google’s material desing was integrated into mirador and the Application was rewritten using React JavaScript Framework. A release date was not issued, but it’s definetly not to be expected in 2019.

I think there is still really a lot to do, it’s heading in the right direction, but still misses some features our TIFY viewer already has, such as url-based routing and nested structures in a table-of-content view.

Creating, delivering and consuming IIIF Manifests within the Goobi Community

Goobi is a workflow engine for digitization projects. As we in Göttingen are using it for scanning Books for the Göttingen Digitization Centre (GDZ) it was nearly a must-attend workshop for me.

The workshop was really good prepared, each attendant received an e-mail prior to the event with the instructions on how to get everything running. A zip archive was provided and assistance in installing or solving problems was quickly given before the workshop. The slides and introductions are open for everyon at https://goobi.io/workshops/iiif2019/.

Steffen started with an introduction and showed how to work with Goobi and provided some tasks, so the participants were able to reproduce each step.

After that Jan, the product manager of [Goobi-Viewer])(https://www.intranda.com/digiverso/goobi-viewer/goobi-viewer-overview/) showed how the IIIF integration works with Goobi and that there was a ready-made product for generating IIIF-Resources right after the digitization.

It was really interesting to see the first two parts of the workshop, so if you want to play around a little with goobi, feel free to download everything you need at the link provided above.

The day was concluded with a social event at the Orangery Göttingen where a barbecue and drinks were served in a sunny enironment.

The first real conference day started with a welcome speach by the president of the Göttingen University, Ulrike Beisiegel.

This day there was only one track, and the main topics were again, that people from different organizations showed what the achieved and implemented in IIIF. Some really exciting and entertaining sessions were held.

The ones I do remember being interesting were:

There were far more interesting ones, so have a look at the list of talks. The programme for Wednesday can be found at https://iiif.io/event/2019/goettingen/wednesday/. 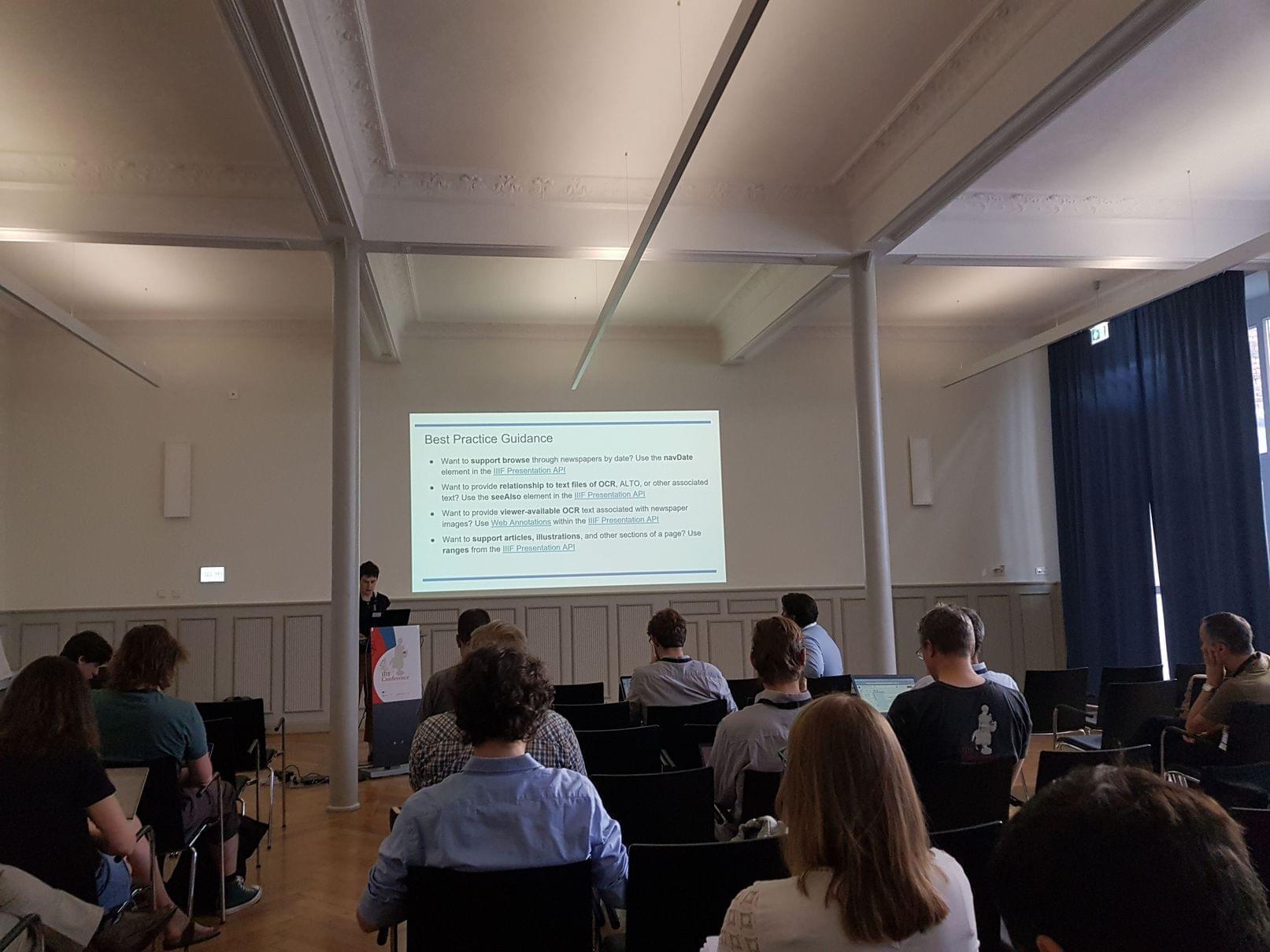 In the evening the Startraum Göttingen was chosen as a social event location where Dinner and Drinks were provided and some interesting talks beside the conference emerged.

Thursday and was packed with sessions and it was really hard to choose between the different tracks.

The following, interesting talks were worth attending: 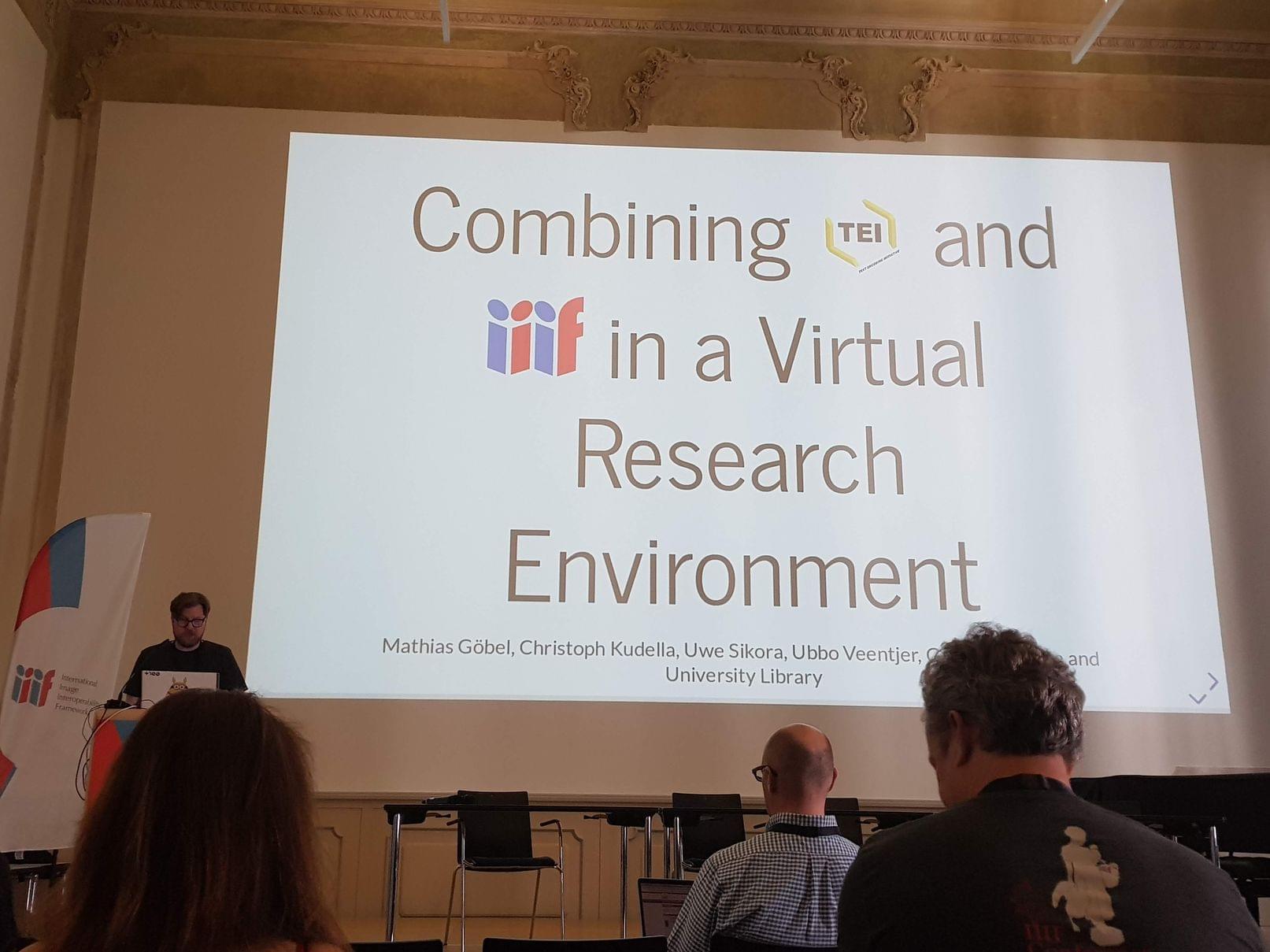 Unfortunatly one of the speakers didn’t show up, so an interesting talk didn’t take place.

The last conference day started with a slot of three tracks, the ones I attended and found quite interesting were

After a short break, the remaining audience was gathered in one room for the last real session(s), the “IIIF, AI and Machine Learning panel session” where some speakers presented their approaches in the AI field.

It was a nice conference, really great organized with many international speakers and a great insight in what is going on and what will be the next hot topics in IIIF (AI, AV). Sometimes I wished the topics were a little more technical, about Code and Infrastructure, such as the talks by ÖNB and BSB.

It’s also remarkable, that our IIIF-Viewer TIFY gained a lot of attention and that it is used in a lot of projects in the world.

All slides from the conference are freely available on Google Drive.

The 2020 IIIF Conference will take place in Boston, MA. next year.

When writing code at some point we want to highlight a specific state, we want to celebrate reaching a new milestone and usually this is the moment to prepare a **release**. Nowadays when

The way we are using TYPO3 has constantly been changed in the last 10 years. I will show you, how we use state-of-the-art technologies to optimize and automatize the way of building and